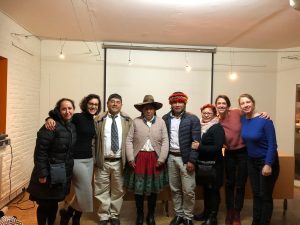 Julia, Virginia, David and Santiago at a public event in Brussels

November was a busy time for the PSG as we prepared for the visit to London, Brussels and Geneva of Peruvian human rights defenders Virginia Pinares and Julia Cuadros.Virginia Pinares is a community leader from Cotabambas in Apurimac. She has been at the forefront of her community’s struggle with the Las Bambas copper mining project. She has had a number of public roles; she was president of the Committee for the Struggle of Las Bambas (Comité de Lucha de Las Bambas) and is now member of the Front for the Defence and Development of Cotabambas and the Women’s Federation. She was one of the community leaders that participated in the 2015 social protests and is currently still facing penal charges of up to eleven years in prison.

Julia Cuadros is a longstanding activist and one of the founding members of the non-governmental organisation Cooperaccion, one of PSG’s partners. She currently heads the extractives industries programme and accompanies communities in the multi-stakeholder dialogue processes of strategic planning and territorial development. She has been advising the communities on the Las Bambas conflict since its inception.

Their visit started in London on 14 November with a packed agenda of meetings and events with civil society organisations that work on issues related to mining, territory and human rights defenders, a meeting with the FCO Desk Officer and a public event of solidarity with Latin Americans living in London. Because of the upcoming General Election it was not possible to meet with any members of parliament. The following day, Virginia and Julia participated in the Annual Conference of the Peru Support Group, where they spoke about the political scenario in Peru and how it affects civil society’s capacity to dialogue, particularly when faced with high turnover in government positions. They also spoke about the situation of human rights defenders working on issues that are related to mining and the legal case in hand against Virginia Pinares.

During their time in London they conveyed the message that international pressure is a very important tool to generate change in the country. Virginia Pinares talked in poignant detail about the struggles that drove her to travel outside Peru and come to Europe for the first time to raise awareness of what is going on in her district and country (see her interview with New Internationalist). Although she is an active member of her community, she highlights that she is only one of very few women that participate in public forums. She also spoke of the inequalities in negotiation processes, when they are faced with professionals from mining companies.

Tensions in Las Bambas started when the communities affected learned of changes to the Environmental Impact Assessment that meant that more than 300 trucks carrying minerals were going to be passing through their communities daily, which they feared would have severe implications on their local environment. They began protesting about the lack of information and absence of dialogue about the implications of these changes. According to Virginia, protesters were confronted by around 5,000 police with devastating consequences, including the death of three persons. Dozens of people were charged for taking part in the protests. Virginia Pinares is amongst those facing possible jail sentences of eleven years and payment of approximately USD80,000 to the mining company in compensation. She and others were accused of illicit association to commit crimes and usurpation, charges which can carry long prison sentences. Although these charges have since been dropped, she is still accused of blocking roads and disturbing the peace. According to Pinares, women are often deterred from raising their voices for fear of being criminalised and eventually facing jail sentences, a fate with serious ramifications for their families and their livelihoods.

Virginia also mentioned repeatedly that they are not against mining, but simply want mining activities to be carried out in a responsible way and for communities to be able to have a say in decisions that affect their lives. 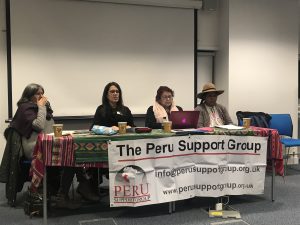 Virginia and Julia speak at an event co-organised by the PSG, LMN and Movimiento Jaguar Despierto

The public event for the Latin American society was co-organised with the London Mining Network and the Movimiento Jaguar Despierto, a group of young Latin Americans living in London who seek to raise awareness about issues affecting communities in the continent. It was an inspiring event where the situation of mining and human rights defenders in Peru was compared with the rest of South America, recognising various similarities and patterns of abuse against those defending their land, territories and their local environment against extractive industries. On the panel were Paula Serafini of the Argentina Solidarity Group, Professor Natalia Sobrevilla (University of Kent) from the Peru Support Group and, as main speakers, Julia Cuadros and Virginia Pinares. Paula talked about cases of criminalisation in Argentina and of communities’ struggle against fracking activities. All those present agreed that solidarity work that can be done in the UK does indeed support the work of human rights defenders in Peru and beyond. This activity provides strength to defenders on the ground and also raises awareness of the struggles people face in Latin America.

After the PSG annual conference, Virginia Pinares and Julia Cuadros left for Brussels for a week of advocacy events and meetings with European Union institutions, organised by the Peru Europe Platform (PEP) and the EU-LAT coalition. The PSG Coordinator accompanied them and also acted as a PEP delegate.  Human rights defenders Santiago Manuin, an indigenous Awajun defender from the north of the Peruvian Amazonia, and David Velazco, a lawyer from NGO Fedepaz (Federación Ecuménica para la Paz) were also in Brussels to talk about the implications of extractive activities on human rights. 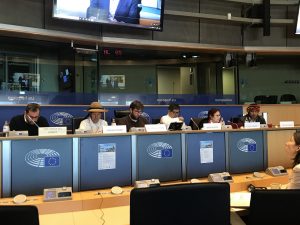 Santiago Manuin spoke of the contamination of rivers caused by oil spills as a result of faults along the north Peruvian pipeline. He also spoke about the continued lack of effective consultation processes and how indigenous communities continued to fight for their right to Free, Prior and Informed Consent. In the case of Block 116, in the Amazonas region, communities are appealing for their right to be consulted following the government’s decision not to consult on the grounds that the concession was granted before the Consultation Law was passed. In August 2019, the Superior Court in Lima ordered the oil companies operating in the area to stop their activities for failing to guarantee consultation.

David Velazco spoke about the criminalisation of human rights defenders and social protests and how the state has prioritised the extraction of natural resources above all else and about how, instead of carrying out the role of guarantor of human rights, the state uses the penal system to criminalise communities.

Julia Cuadros and Virginia Pinares departed from Brussels on 23 November, heading towards their last destination, Geneva, to participate in the United Nations Forum on Business and Human Rights. There they continued their quest to ensure that human rights are fully integrated into business practices. In particular they want protection for those who defend the human rights of communities, so that they can be free to do their job without fear of stigmatisation, imprisonment or attacks.

It was a very rewarding week for our visitors and certainly for us at the PSG, as we had the opportunity to provide a platform for these defenders to convey their message and gave us new and refreshed ideas about how to continue supporting their work.

Human rights defenders in Cotabambas once again left in suspense.