Indigenous Groups Demand Reform of the ‘Law of the Jungle’ 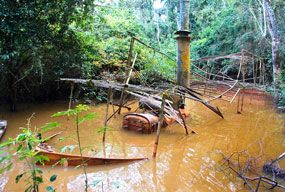 Indigenous groups in Peru have blockaded roads and rivers, primarily in the Amazon region, in protest against a series of legislative decrees, collectively known as the ‘Law of the Jungle’. This was approved last year by President Alan Garcia to make Peruvian law conform to the Free Trade Agreement (FTA) with the United States. They believe that the legislation will facilitate the access of multinational companies into the region, specifically those related to oil, mining, logging and agriculture, and further eliminate indigenous peoples’ right to prior consultation and consent.

The government has declared a state of emergency of up to 60 days in the regions of Cusco, Ucayali, Loreto and Amazonas. In addition, the ministry of defence has authorised the army to give support to the police in dealing with protests by indigenous groups over land, oil and mineral rights for up to 30 days.

Indigenous groups believe that the government is not defending them sufficiently against foreign companies which they believe have illegally entered their lands. Furthermore, groups such as the Peruvian Rainforest Inter-Ethnic Development Association, AIDESEP, have stated that the government is not complying with either the international treaties signed by Peru or its own Constitution.

Last year it seemed that Congress had repealed the controversial laws, however as this was not voted on before a full Congress the legislation has remained in legal limbo, leading to renewed protests and the current strike.

Demands
Indigenous groups in Peru’s Amazon are demanding that the defence of their land rights is acknowledged by national government, in line with the international treaties that Peru has signed, such as ILO (International Labour Organisation) Convention 169 on Indigenous and Tribal Peoples and the UN Declaration on the Rights of Indigenous Peoples. Specifically, the protesters are pressing for: the fulfilment of the government’s promise to set up negotiations to discuss their concerns; a lifting of the state of emergency declared on May 9th in the northern provinces of Loreto and Amazonas, the eastern province of Ucayali, and Cusco in the south; and give real powers to the National Institute for the Development of Andean, Amazonian, and Afro-Peruvian Peoples (INDEPA), which is currently an agency of the Ministry of Women’s Affairs and Social Development.

Indigenous groups have demanded to participate and be consulted on decisions or legislation that could affect them and feel particularly aggrieved that they were not consulted about the series of decrees passed by the government last year in the framework of the implementation of the FTA with the US.

Who calls the Shots?
Alberto Pizango, the president of the Peruvian Rainforest Inter-Ethnic Development Association AIDESEP called for “insurgency” in response to perceived government aggression and lack of dialogue. However, following talks with the Peruvian Ombudsman’s office, he and other indigenous leaders agreed to retract this term in favour of continued efforts to seek peaceful solutions to their demands and concerns within the rule of law. The Ombudsman’s office has also submitted a report to Congress on the right to consultation of indigenous peoples.

Pizango denies that he, or the movement of indigenous groups that he represents, are against development, “we are not against the oil or timber companies, we are against the abuse and violation of indigenous peoples’ rights. This is not a problem dating back to last year, it’s an historic problem.” Nevertheless, he has still been criminally charged for his role in the protests.

As the protests continued, President Alan Garcia stated that every Peruvian should be entitled to benefit from the nation’s natural resources, and that “the Amazon belonged to all Peruvians, not just a small group of people who live there.” Under Peru’s constitution the state is the owner of the country’s mineral and hydrocarbon wealth.

Environment minister Antonio Brack has said that Congress should reflect on any abolition of the legislative decrees in question, particularly the new forestry law (DL 1090), as this could jeopardise the FTA with the US. However, critics suggest that the law reduces transparency and eliminates input from civil society regarding the use of national forest lands.

Peruvian and international human rights organisations are widely critical of the Peruvian government’s conduct, which they claim denies indigenous peoples their rights. Atossa Soltani, Executive Director of the human rights and environmental organisation Amazon Watch, commented: “The Garcia Administration is clearly out of step with international conventions – ones ratified by Peru – that obligate governments to uphold indigenous peoples’ rights. We urge the government of Peru to use restraint and avoid bloodshed, seeking meaningful dialogue to resolve the conflict instead.” Eight Catholic bishops have urged the President to re-think his position on the legislation which they consider “a threat to the Amazon”.

The current reaction of the government and of President Garcia in particular reflects ongoing policy to regenerate the Peruvian economy by promoting private, particularly foreign investment. This ‘development plan’ was mapped out in Garcia’s infamous opinion piece two years ago, entitled the ‘dog in the manger syndrome’ (El Sindrome del Perro del Hortelano), and referred to the reform of laws which would enable investors to buy up large-scale property titles in the Amazon and reduce the property rights of peasant communities in the Andes to encourage mining and other activities (See Peru Update 124).

At the end of last year a cross-party congressional commission, created after the indigenous protests in the Amazon in August 2008, recommended the repeal of two of the laws that opened up communally-owned native lands to private investment (DL 1015 and 1073). The same commission has issued a report recommending the repeal of other decrees, including the Forest and Wildlife Law (DL 1090), which it has declared unconstitutional.

The Chair of this commission, Gloria Ramos, said to the Inter Press News Agency that they have “insisted to the president of Congress, the various political parties, and the prime minister that these decrees should be overruled, but there has been no political will on the part of the ruling party lawmakers, and the executive branch has just now begun to react again under the pressure of the protests”. She said that they are particularly concerned about the legislative decree 1064, which eliminates the mechanism that extractives companies have to consult with indigenous groups before exploiting natural resources on their lands. This could open up areas to extractives industries through a reclassification of the zoning of Amazon jungle areas.

In response to the protests, Prime Minister Yehude Simon has set up a multi-sector commission to analyse the demands of the indigenous peoples in the Amazon. Although the leaders of AIDESEP were not present at the commission’s inauguration, Pizango has stated that they will participate in the dialogue. However, the strike and the State of Emergency continue.”